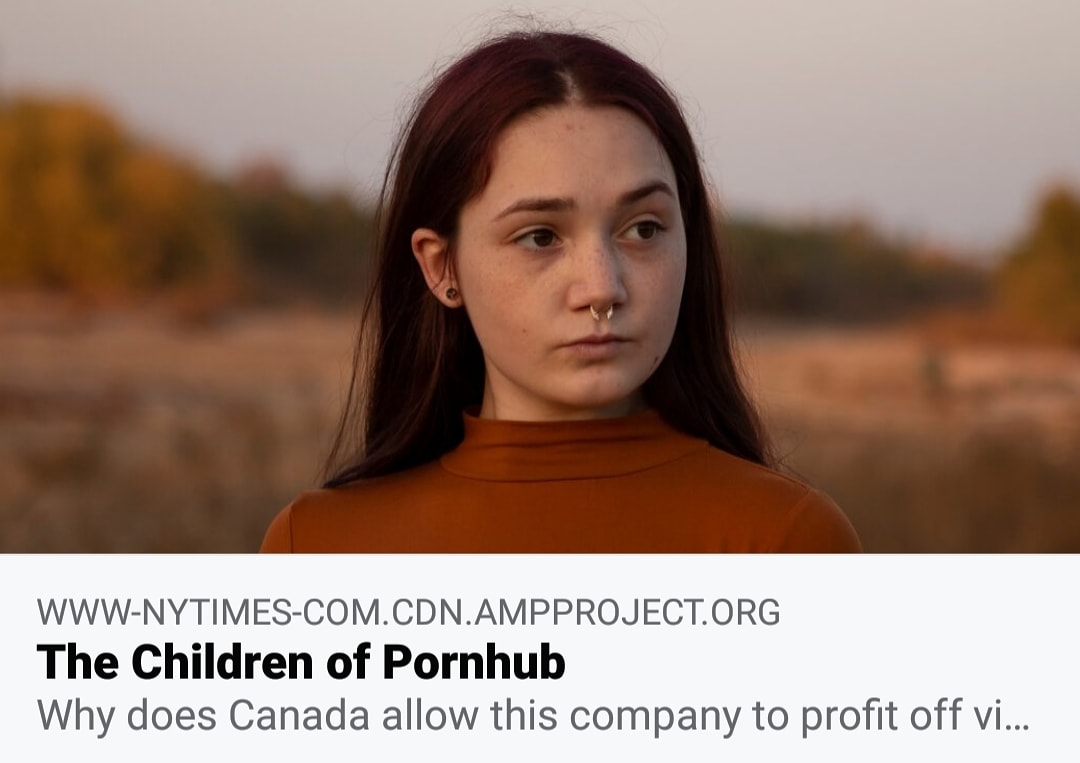 Why does Canada allow this company to profit off videos of exploitation and assault?

Yet there’s another side of the company: Its site is infested with rape videos. It monetizes child rapes, revenge pornography, spy cam videos of women showering, racist and misogynist content, and footage of women being asphyxiated in plastic bags.

“You type ‘Young Asian’ and you can probably find me,” she added.

At 14, Serena K. Fleites was an A student in Bakersfield, Calif., who had never made out with a boy. But in the eighth grade she developed a crush on a boy a year older, and he asked her to take a naked video of herself. She sent it to him, and this changed her life.

Fleites’s world imploded. It’s tough enough to be 14 without having your classmates entertain themselves by looking at you naked, and then mocking you as a slut. “People were texting me, if I didn’t send them a video, they were going to send them to my mom,” she said.

Fleites quarreled with her mother and began cutting herself. Then one day she went to the medicine cabinet and took every antidepressant pill she could find.

Three days later, she woke up in the hospital, frustrated to be still alive. Next she hanged herself in the bathroom; her little sister found her, and medics revived her.

As Fleites spiraled downward, a friend introduced her to meth and opioids, and she became addicted to both. She dropped out of school and became homeless.

At 16, she advertised on Craigslist and began selling naked photos and videos of herself. It was a way to make a bit of money, and maybe also a way to punish herself. She thought, “I’m not worth anything any more because everybody has already seen my body,” she told me.

So today Fleites, 19, off drugs for a year but unemployed and traumatized, is living in her car in Bakersfield, along with three dogs that have proved more loyal and loving than the human species. She dreams of becoming a vet technician but isn’t sure how to get there. “It’s kind of hard to go to school when you’re living in a car with dogs,” she said.

“I was dumb,” she acknowledged, noting that she had never imagined that the videos could be shared online. “It was one small thing that a teenager does, and it’s crazy how it turns into something so much bigger.

I asked the National Center for Missing and Exploited Children to compile the number of images, videos and other content related to child sexual exploitation reported to it each year. In 2015, it received reports of 6.5 million videos or other files; in 2017, 20.6 million; and in 2019, 69.2 million.

Congress and successive presidents have done almost nothing as this problem has grown. The tech world that made it possible has been mostly passive, in a defensive crouch.

But pioneering reporting in 2019 by my Times colleagues has prodded Congress to begin debating competingstrategies to address child exploitation.

Taylor said she has twice attempted suicide because of the humiliation and trauma. Like others quoted here, she agreed to tell her story and help document it because she thought it might help other girls avoid suffering as she did.

Nominally based in Luxembourg for tax reasons, Mindgeek is a private company run from Montreal. It does not disclose who owns it, but it is led by Feras Antoon and David Tassillo, both Canadians, who declined to be interviewed.

Prime Minister Justin Trudeau of Canada calls himself a feminist and has been proud of his government’s efforts to empower women worldwide. So a question for Trudeau and all Canadians: Why does Canada host a company that inflicts rape videos on the world?

Mindgeek’s moderators are charged with filtering out videos of children, but its business model profits from sex videos starring young people.

The moderators fast forward through videos, but it’s often difficult to assess whether a person is 14 or 18, or whether torture is real or fake. Most of the underage content involves teenagers, the moderator I spoke with said, but some comes from spy cams in toilets or changing rooms and shows children only 8 to 12.

“The job in itself is soul-destroying,” the moderator said.

It has also compiled a list of banned content. I obtained a copy of this list, and it purports to bar videos with terms or themes like “rape,” “preteen,” “pedophilia” and “bestiality” (it helpfully clarifies that this “includes eels, fish, octopus, insects”). Diapers are OK “if no scatophilia.” Mutilation depends on context but “cannot depict severing parts of the body.”

In the last few days as I was completing this article, two new videos of prepubescent girls being assaulted were posted, along with a sex video of a 15-year-old girl who was suicidal after it went online. I don’t see how good-faith moderators could approve any of these videos.

But aside from limiting immunity so that companies are incentivized to behave better, here are three steps that would help: